The Japan-led Trans-Pacific Partnership (CPTPPA) of 2018 is the most far-reaching ‘megaregional’ economic agreement in force, with several major countries beyond its eleven negotiating countries also interested. Still bearing the stamp of the original US involvement before the Trump-era reversal, TPP is the first instance of ‘megaregulation’: a demanding combination of inter-state economic ordering and national regulatory governance on a highly ambitious substantive and trans-regional scale. Its text and ambition have influenced other negotiations ranging from the Japan-EU Agreement (JEEPA) and the US-Mexico-Canada Agreement (USMCA) to the projected Pan-Asian Regional Comprehensive Economic Partnership (RCEP).

Country studies include detailed analyses of TPP-related politics and approaches in Japan, Mexico, Brazil, China, India, Indonesia, and Thailand. Contributors include leading practitioners and scholars in law, economics, and political science. At a time when the WTO and other global-scale institutions are struggling with economic nationalism and geopolitics, and bilateral and regional agreements are pressed by public disagreement and incompatibility with digital and capital and value chain flows, the megaregional ambition of TPP is increasingly important as a precedent requiring the close scrutiny this book presents. 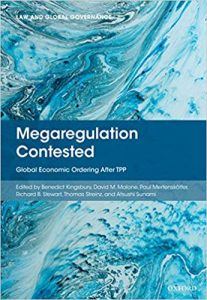