As the impacts of marine plastic pollution become ever more apparent, a number of states have begun calling for the development of a new international agreement to address the problem. This essay considers which jurisdictional entities should be engaged in the drafting of such an agreement if one should materialize. While nation states have traditionally been the main entities recognized as having the legal personality to make treaties, cities have the potential to substantially advance efforts to mitigate certain international environmental problems, including the plague of global marine plastic pollution. We argue, on functional grounds, that this potential should be acknowledged, indeed encouraged, by engaging cities in the development of international action to address these problems. In particular, we suggest a “city supplement” to international agreements dealing with environmental problems where there are functional reasons for involving cities. 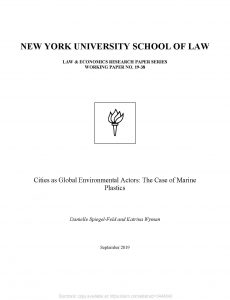