In the order instituting New York’s “Reforming the Energy Vision (REV)” proceeding, the Public Service Commission indicated that the United Kingdom’s novel approach to network regulation known as “RIIO” could serve as a model for reforms in New York State. However, in light of a dearth of up-to-date and comprehensive information in the US about RIIO’s design and early implementation, the Guarini Center hosted a daylong roundtable discussion on RIIO on November 18, 2014.

The forum brought together experts from the UK and US to analyze the RIIO model and compare the relevant political, economic, and regulatory contexts in the UK and New York State in order to evaluate adapting elements of RIIO in New York. Participants at the meeting included British representatives from government, industry, and academia as well as American economists, financiers, lawyers, environmental advocates, electric industry representatives and New York State Department of Public Service staff. Notably, many of the British attendees were directly involved in designing and implementing RIIO. 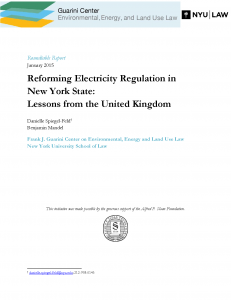