The City Environmental Quality Review (CEQR) is the process by which agencies in the City of New York evaluate their discretionary actions for environmental effects. As an extension of the New York State Environmental Quality Review Act (SEQRA), it imposes a substantive mandate on agencies to “act and choose alternatives” which minimize or avoid significant adverse impacts “to the maximum extent practicable.” The law also requires agencies to make a finding that the identified negative impacts will in fact be mitigated before they may proceed with a proposed action.

Over the years, the City has refined and adapted this process to take into account its unique urban context, including its role in determining land use. Despite these efforts, a variety of stakeholders have criticized the City’s approach to mitigation under CEQR as being non-transparent, ineffective, inefficient, inadequate, and lacking in tools for holding the City accountable. To this end, various calls for reform have been made by a variety of stakeholders.

Drawing on existing literature, interviews with field experts, and case studies of six environmental impact statements stemming from discretionary actions taken in two community districts, this paper identifies a number of key criticisms and, in response, lays out broad goals for reform. These goals in mind, we surveyed federal, state, and local frameworks for practices other jurisdictions use in their own review processes that could be adopted locally to improve mitigation procedures under CEQR. From this survey, we law out potential options for reform, which were presented to various stakeholders during roundtable meetings held at the New York University School of Law in December 2019 and February 2020. 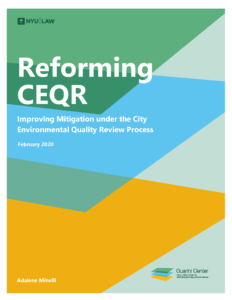