New development offers a variety of potential social and economic benefits for New York City. At the same time, new development puts additional pressure on the local environment, including on critical physical and social infrastructure, much of which is already overburdened and in need of upgrades. In this context, some have called upon the City to explore whether or not to adopt an impact fee program. However, New York State law is unclear as to whether local governments have the requisite authority to adopt one.

This policy brief identifies two potential sources of legal authority that New York City could draw upon should it wish to impose impact fees on new development: its general home rule powers and the State Environmental Quality and Review Act (SEQRA). It also identifies some potential constitutional and statutory constraints, including limitations under state doctrines on preemption and local taxation, and under federal exactions jurisprudence. 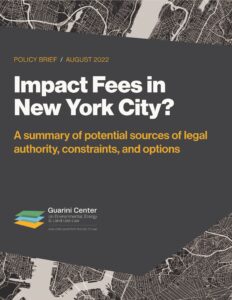