Last week, the Supreme Court granted certiorari in Hughes v. PPL EnergyPlus, LLC (“PPL”), its second case of the term involving the Federal Energy Regulatory Commission’s (“FERC”) regulation of wholesale electricity markets. Two days earlier, the Court heard oral argument in the first case, Federal Energy Regulatory Commission v. Electric Power Supply Association (“EPSA”). Following argument in EPSA, the prevailing wisdom was that the Court was divided, and that a 4-4 tie affirming the lower court opinion was a real possibility (Justice Samuel Alito is recused in that case). After the Court granted PPL, attention turned to what implications, if any, the decision to hear PPL had for EPSA, especially given the relatively unusual circumstances surrounding the Court’s decision to take the case: every court to have considered the issue in PPL had reached the same conclusion and the Solicitor General, the federal government’s lawyer before the Supreme Court, had urged the Court not to take the case. 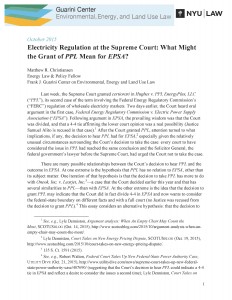