The Caribbean hurricanes of 2017 made clear that many of the islands’ power systems are woefully unprepared to withstand the increasingly severe weather events that climate change is generating. Perhaps no island exemplified this inadequacy better than Puerto Rico; one month after hurricane Maria barreled into the island, approximately eighty percent of its population was still in the dark. Two months after the storm hit, more than half of Puerto Rico remained without power and the island’s transmission system lay in tatters.

Renewable energy-powered microgrids could significantly enhance the region’s resiliency. Microgrids generate electricity close to where it is consumed and can operate independently of the main generation and transmission system. As such, microgrids can keep communities’ lights on even when the central grid fails. And because modern-day microgrids often incorporate a mix of renewable energy resources and battery storage, they can keep functioning even in the face of fossil fuel shortages, which often occur in the aftermath of severe storms. By replacing fossil fuel generation with renewable energy, microgrids help advance climate goals as well.

In several respects, the Caribbean states are ideal candidates to lead the transition towards renewable energy microgrids. The recent loss of infrastructure, while devastating, provides an opportunity to rebuild the grid in a more sensible manner and creates a strong impetus to improve resiliency. Moreover, many Caribbean states have traditionally relied on imported fossil fuels for their electricity supply, which has caused them to endure unusually high power prices. As described herein, renewable energy powered microgrids can help lower power prices, thus boosting the region’s economic competitiveness.  Finally, the islands’ small size can make their bureaucracies more nimble and help facilitate more rapid, systemic change.

And yet, relatively few renewable energy-powered microgrids have been deployed in the Caribbean region to date. To understand the cause of the stagnation, on October 31, 2017 the Guarini Center on Environmental, Energy, and Land Use Law at New York University School of Law (“Guarini Center”) held a workshop in collaboration with Tesla, Inc. and the United Arab Emirates Ministry of Foreign Affairs and International Cooperation to examine what obstacles have stifled microgrid deployment to date and how can we overcome these obstacles. The workshop was attended by a diverse group of experts from the development community, the renewable energy industry, the diplomatic community, non-governmental organizations, academia, as well as the utilities and energy ministries of four Caribbean states (Belize, Dominican Republic, Grenada, and Suriname).

The workshop provided strong evidence that renewable energy powered microgrids could lower the cost of electricity production in the participating states. In fact, case studies of potential new microgrid projects in remote regions of Belize, Grenada, Suriname, and the Dominican Republic indicated that the local utilities could minimize costs by installing microgrids in which renewable energy supplied at least 70 percent of the electricity consumed. And, critically, the modeling performed for these case studies did not assign any monetary value to many of the benefits microgrids provide, including: enhanced resiliency, reduced exposure to volatile fuel prices, local health benefits from cleaner air quality, and increased flexibility in complying with future climate obligations. If these benefits had been monetized, the economic case for transitioning towards renewable energy would likely have been even stronger. 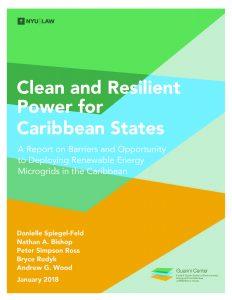