There are a number of reasons to install a green roof in an urban setting. Green roofs can help with stormwater retention, mitigate the urban heat island effect, enhance biodiversity, improve local air quality, and reduce building energy usage. The myriad benefits provided make green roofs an attractive tool for cities seeking to improve their sustainability. With this in mind, cities around the world have adopted diverse policies to promote green roofs in recent years. Several cities, including Toronto, San Francisco, and Copenhagen, have passed laws mandating green roof installations when constructing new buildings, or when renovating an existing buildings. Other cities, including Washington, DC, provide rebates or tax credits for green roof installation projects. Still others, including Austin and Portland, have amended their zoning laws to grant density bonuses or other zoning incentives to developers who pursue green roof projects. Finally, several cities provide reductions to stormwater fees to those who install green roofs.

As shown below, New York City has provided financial incentives for green roof projects via both a tax abatement and a grant program. However, neither has been particularly effective at incentivizing green roofs. The tax abatement is set to expire this year, and, in the eight years that it was offered, only seven property owners were granted abatements. Meanwhile, the grant program has funded only thirty-five green infrastructure projects in the eight years since it was launched and has done so at great expense. These efforts can be strengthened. 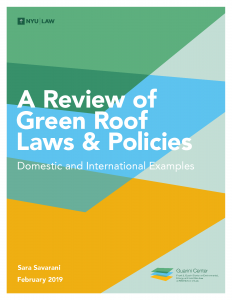